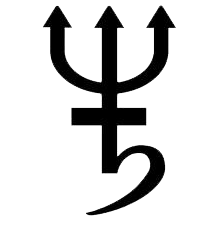 .:.The "Medusa Effect" is what I called it, in one of my essays. It's when things you write, your written thoughts, your written views, your written opinions, and so on, turn to stone as soon as they are written. Such written things remain unchanged, all the while, as a living organism, you continuously change and grow.
The same with making something like the WSA. It was created in the past, and as those years progress, I change inside as a person, but, that WSA stayed the same.
And so, being that the WSA no longer represents or reflects the person I have grown to be: I hereby dissolve it this day of November 19, 2022 as Caligula. The WSA henceforth is defunct as of today.
^^^
I really think what killed it for me was getting initiated into Palo Mayombe back in 2018 [which I've written about in Nexion Zine]. Palo, is a real animistic and Pagan culture and religion, that really does go back hundreds of years in Cuba [600 years], and goes back thousands of years in the Congo.
Palo isn't something invented on the internet. It doesn't have 5000 pages of Corpus... in fact, it has no written corpus at all. It's not some guy's personal ideations. Not some guy's mythos and fantasies. It's real witchcraft, witch doctory, and Kongo Animism/Paganism. It's real. A real living culture. A real living Tradition. A real living Animistic Religion.
And so the deeper I got into Palo, the more unreal ONA became to me. ONA just became a hot mess of thousands of pages of bloatware, all invented/codified/written/ideated by one single man.
Since 2018, after my initiation into Palo Mayombe, I haven't been the same person. It's hard to explain, unless you have also gotten initiated into something like this. There is a depth to Palo regarding what it knows and understands about Malongo Yaya [Mother Nature]. It has ancient knowledge about plants and trees, about nature spirits, about the medicinal and magical properties of plants [and how to come to such knowledge]. Nature comes to life when you are Palo. It's alive, and it's a living book of insight and wisdom.
In the end, Nature and its timeless Wisdom trumps the ideas of any man or prophet. Ideations, doctrines, ideology, is a wall that divided you from being close and intimate with Nature. I will leave this blog up, but this post will be my last thing I will ever write.
/Chloe
at 11/19/2022 07:41:00 PM